So Sick of Digital! Gahhh!!! 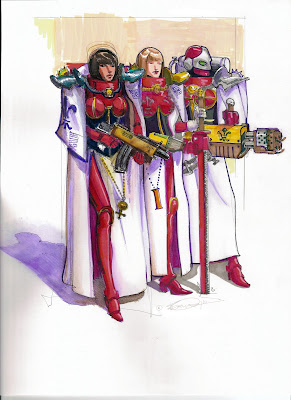 Ok, so I was working on something similar in Painter. I think I might have cracked. It's currently abandoned, until I get either uncracked or unsick of it. I then did something drastic.

I whipped out the Borden & Riley #234 Paris Bleed Proof Paper for Pens.
This stuff is great. Anyway, much doodling-scratching- and Crayola marker action later. I bring you this.
It's so real to me, pencil and pen on paper. Magic marker, even the Crayola's were so responsive. They were just "There", in a way that the tinting brush never was for me. It just makes me want to pull out a super large sheet of Strathmore Museum Board. It's so good, I gave it all Caps.

In other news, my Brother got his LDS Mission call today. He's going to Morristown, New Jersey. Here's me hoping that he has a good "Two year vacation." This is funny, just because I went to the New York, New York North Mission about 14 years ago. Time flies I guess.
Posted by Ed Davenport at 8:05 PM

Nice! Usually don't see the Sisters marching in full regalia like that. Good to see you're working on rounding out the 40K universe a bit more.

Soooo, you're bro's going to be in NJ huh? You're going to visit him right, so we can go tear up New York City?

You know it. =) It gives me a good excuse to move to New York. Not that I'd hang out with him every P-Day, but it would be fun to bend some rules and see him at Christmas or something.

The 40k universe is such a fun place to play in. The games kinda fallen out of my favor, but drawing it still rocks.

Next sisters pic I'm doing, unless I finish that digital turd I pooped out the other day, will probably involve a squad disembarking a land raider.