Progress is his middle name... 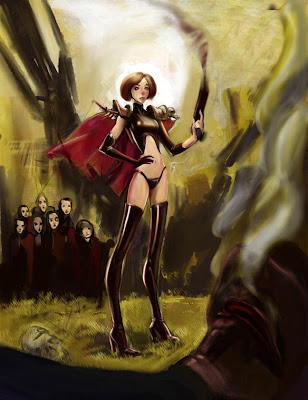 It's coming right along. I'm very happy with it. And I'm now doing the little tricks to it. Like looking at it in the mirror, printing it out, and showing people who's opinion I trust. I've fought like crazy to keep the actual acrylic texture in the background. No mean feat considering my first instincts are to hit everything with the Tinting brush. The faces in the peanut gallery need more polish, but I'm happy with their diversity. The foreground figure came out completely black in the printout I did. I got too excited about showing the charred edges of his laser wound. Placed him in the proverbial microwave for a minute or two too long. This has been a fantastic learning experience for using textures from Painter in an actual work. I'm very happy with the effect. Some modeling of the gun's form, a second pass on the back ground, and some good hand painted texture highlights and I'll call it done.

Well, at least; that's what the left brain has to say.

A funny thing happened on the way to the forum... 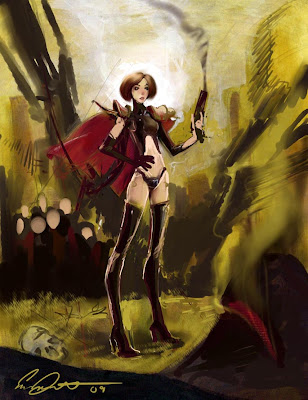 It’s been a while since I’ve posted, I don’t want to get into a deep post, or take up a ton of space like I’m trying to make up for missing posts. But I’ve also had much on my mind.

I’ve taken the summer off and I’m spending it in Idaho.

It’s been great so far. I’ve got a niece and nephews nearby, my mother still cooks for me, I’ve had the chance to touch base with a double handful of old friends I haven't seen since I moved to SF back on 01. In fact, one of my first weeks back I found myself demonstrating digital painting techniques to an interior design class for a former instructor of mine.

I’ve also had a lesson on perspective, the kind that doesn’t involve any type of vanishing point what so ever.

It came from a ‘where are you now’ conversation with an old friend who I used to draw with 15 years ago. He zigged, I zagged. He’s now a brilliant electrical engineer, I’m now an Illustrator who’s reworking his portfolio.

As we spoke, it dawned on me that there’s a responsibility for us dream chasers to work towards, chase, and catch our dreams. Consider the legions of people out there who’ve given up on being what they want before they even gave it a chance.

What would accountants wish their real job was, if it wasn’t for art students who’ve made the transition to art professional? I’m one of few that have taken the road less traveled. I’ve cultivated skills that many people killed in themselves during the 6th grade. To not do something grand with those skills would be a crime.

It popped a pretty formidable depression bubble that I had built up. Which is the reason that I bring it up. There is no problem that exists, but what it common to man. Maybe someone else out there has been in the same situation. An Art School Graduate who’s wondering where their motivation is. A indy band punk rocker who’s taking chemistry classes. The aspiring country singers of the world.

Which segues right into my posted image. It all comes back to people getting lasered by a hot chick. It’s not perfect; indeed, while writing this I’ve seen a boat load of things that need to be cleaned up, softened, hardened, delineated, blended, and erased. It exists, I’m going to work on it. And it’s going to be a damn spiffy image in my portfolio.
Posted by Ed Davenport at 12:40 AM 3 comments: