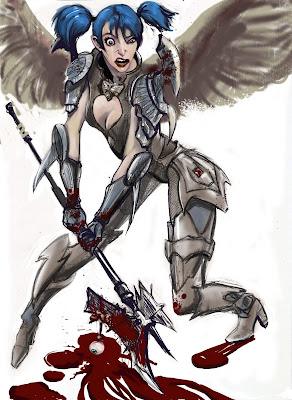 Woah, didn't want to get to more than six months without updating.

Not that it would be a record or anything. I just didn't feel like I had anything that I liked enough to post up, that or I've been too busy working on working.
Found a good way to light a nice fire under my can... I've been posting on deviant art under this same name. Drives safari nuts, but whatever.
It's cool, because you get near instant feedback on your work. I know if I haven't got a favorite in less than five minutes I've posted up a real dog.

This was based off the new mmo Aion. It's got some pretty slick characters and some crazy group pvp gameplay. More or less as if someone cut all the fat from World of Warcraft. Something that drives me nuts about any hp based combat system is the lack of a devastating head shot system. They'll weave in the occasional critical hit, but nothing that really represents the full removal of the brain pan with a instrument designed for, uh, removing brain pans.

I guess this is where I say that art > video games.
Posted by Ed Davenport at 3:56 AM

You sure you don't want to work at my company Ed? We're always looking out for people who can paint blood, and lots of it!