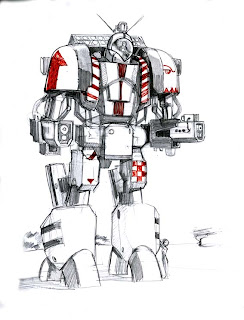 Some of the best giant robots out there are the Battletech ‘mechs. There are quicker robots, sleeker ones to be sure. Few, with bigger guns. They were some of the first giant robots to really take my imagination (or sketchbook, as the case may be) by storm. I was an addict from an early age too. Not the computer games, I’m talking the pen and paper stuff. One of the first things I regularly drew was Battlemechs. Well, them and a lot of Transformers. But the Transformers never had a board game. Robotech did, but I didn’t discover that until much later. Here I am, many years later returning to my early roots here. It's a giant robot homecoming of sorts.
Anyway, enjoy the lasers.
Posted by Ed Davenport at 10:34 PM

Nice shoulder pads. Where the hell did you get that idea, I'm wondering....haha. Hey is that a naked girl at the mech's feet? :-)

Thanks,
no.
And here and there. =D

Sweet, updates! :D We'll turn you into a blogger yet!

Anyways.. The robot looks cool, and I like your girl (the one from your other post.. she has nicely done hands.. I take it this is her robot eh? :) ). Keep 'em coming! :D

I love the battlemaster, it has been my favorite for the longest of times. Amazing picture, your blog is really looking great.